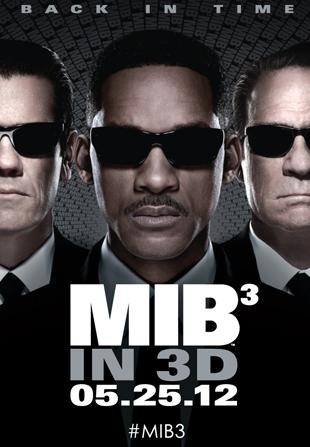 Sony Pictures has announced that RCA Records/Polo Grounds Music/Mr. 305 recording artist Pitbull will provide the theme song to Men in Black 3. Titled "Back in Time," the song will be available as a digital single and released to radio on March 26, two months ahead of the film's May 25th release date.

"Back in Time" was written for the film by Armando C. Perez (Pitbull), Marc Kinchen, Adrian Trejo and Urales Vargas and features a sample of the 1950s hit "Love is Strange," written by Sylvia Robinson, Ellas McDaniel and Mickey Baker, which went to #1 for the R&B duo Mickey & Sylvia.

"It's an incredible honor to be a part of such an amazing franchise as Men in Black and I have so much respect for Will Smith, especially with our similar musical backgrounds," says Pitbull. "Wanting to keep the music fun yet modern, we used the slogan of the movie and flipped it back into the song that 'in order to understand the future, you have to go back in time.'"

Barry Sonnenfeld, the director of the film, added, "My 19-year-old daughter turned me on to Pitbull. I'm thrilled that he wrote such a great song for our movie that totally gets it."

You can check out the song below its pretty Bad, actually its really bad. Its one of the worst song, if not thee worst song we ever heard… Will Smith gots to make another song that will find its way straight into our heads, like Men in Black, and Nod Ya Head!!

In Men in Black 3, Agents J (Will Smith) and K (Tommy Lee Jones) are back... in time. J has seen some inexplicable things in his 15 years with the Men in Black, but nothing, not even aliens, perplexes him as much as his wry, reticent partner. But when K’s life and the fate of the planet are put at stake, Agent J will have to travel back in time to put things right. J discovers that there are secrets to the universe that K never told him -- secrets that will reveal themselves as he teams up with the young Agent K (Josh Brolin) to save his partner, the agency, and the future of humankind.
Labels: INTERESTS INTERVIEWS